While Deck’s inclinometer is most commonly found with a wooden stock, there are two known nickel plated examples in what could be called the mantel clock style. The inclinometer bares the mark as having been made by The Risdon Tool Works of Waterbury, Connecticut, and has a wonderful Art Deco appearance. What relation Deck had with Risdon has yet to be uncovered, as Deck was producing the more common wooden offerings of his patent himself under the name of the T.F. Deck Gravity Level Co. in Toledo, Ohio. As noted above this is one of only two known examples, and until I found this one, this style was unknown to me. The other example resides in the finest level collection in the universe, but does not have its original box. This extraordinary inclinometer remains in super fine, mint condition noting some tarnish on the back from resting on the corrugation of its original box for the last 110 +/- years. The pointer doesn’t rest exactly at the level position and I imagine this could be corrected, but the inner workings took Deck a number of years to perfect and are very complex, so I’ve decided not to mess with it. A unique little feature I find really cool is the pointer has a slight curve in it so it clears the round-headed screws in the face (these retain their original bluing). A very special and very rare inclinometer. Perhaps a once in a lifetime opportunity.

Prices include shipping to CONUS.

Transactions for Pennsylvania residents will have a 6% sales tax. 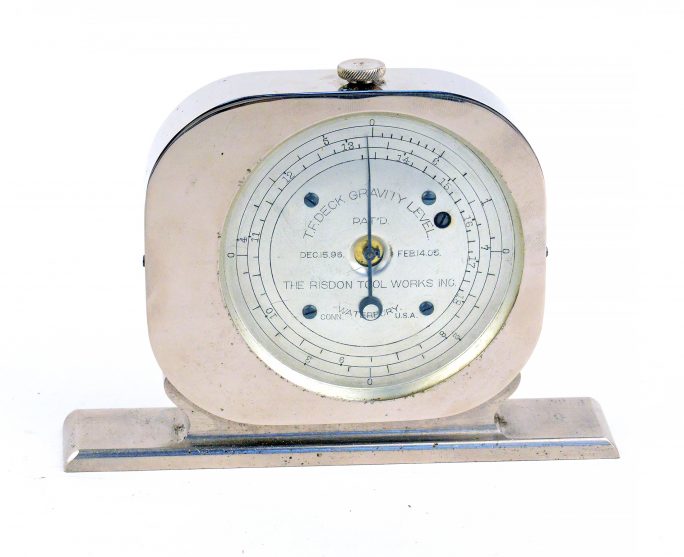